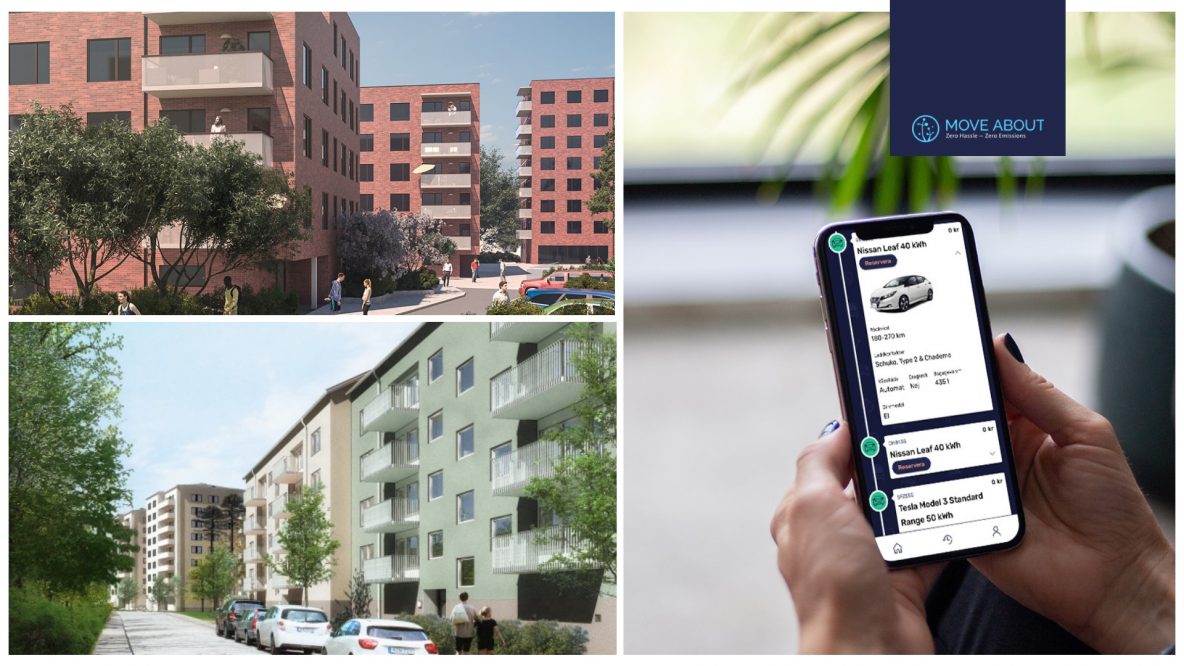 Now it’s even easier to move emission free in Stockholm. In collaboration with Svenska Bostäder and Familjebostäder, Move About is establishing two new electric car sharing locations in the areas Blackeberg and Hägersten. The cars are available for bookings in the Move About app.

Move About recently launched its eighth and ninth electric car sharing location in the Stockholm area. The two separate establishments take place in collaboration with the public housing companies Svenska Bostäder and Familjebostäder.

The first location consists of two Nissan Leaf (62 kWh) and is being launched in collaboration with Familjebostäder. The cars are located next to the 99 newly produced rental apartments in the Banken quarter and can be found at Inteckningsvägen 112 in Hägersten.

- We invest heavily in mobility solutions that make it easier for our tenants to live life without having to own a car themselves. It is about building more bicycle parking spaces, the possibility to repair your own bicycle, access to shared cars and bicycles. We welcome our sixth car sharing station in Hägerstensåsen. In this location, there are only pure electric cars, which is completely in line with our climate and environmental thinking, says Johan Eklöf, vehicle coordinator, Familjebostäder.

The second station is adjacent to the 95 newly produced rental apartments at the Greken quarter in Blackeberg. The location is launched in collaboration with Svenska Bostäder and the two cars can be found at Holbergsgatan 156.


Saves space and reduces emissions
Car sharing has become a popular addition for housing companies and property developers who work actively with environmental- and climate issues, both in new production and existing stocks. In addition to the obvious climate benefit, a shared car replaces approximately 10-15 privately owned cars. This frees up many square meters which can instead be used for more housing or social spaces.

- Electric car sharing has proven to be a successful concept for housing companies and property developers - as space is freed up and carbon dioxide emissions are reduced. A win-win, says Peter Aldby, Country Manager at Move About Sweden.

- That residents gain access to our entire public fleet means that they can book electric cars just as easily in other cities as well, concludes Peter Aldby, Country Manager, Move About Sweden.

Move About Group AB in brief

Move About was founded in Oslo, Norway, 2007 and has over 58,500 users today on their platform, and over 730 electric cars in the Company’s vehicle fleet with presence in Sweden, Norway, and Germany.